I slept well, despite the small size of my room and the noisy air conditioning unit. Did I mention the size of my room before? Let’s just say that the bed took up most of the space. Luggage went under the bed (no room anywhere else) and ¼ of the room’s space was the tiny en suite – this was Asian style, meaning that the shower is over the toilet. You put the seat down before you shower…….all in all the room measured about 2 metres by 3 metres.

Before I came to Hong Kong I had always thought of it as just a city. Of course I knew it was on an island, but I had an image in my mind of a tiny island, totally taken over by high rise buildings. This was wrong! As I have said before, Hong Kong city itself is not very big. Neither is Hong Kong Island, yet large parts of the island are covered by parks and greenery. Hiking and other outdoor activities are possible. It is surprisingly easy to go from the fast pace of the busy city to a more laid back relaxed countryside setting. All this in less than half an hour’s drive!

Full of enthusiasm from the previous day’s adventures, I got up early, find food and made my way across the harbour to the Big Bus pick up point. I caught the first bus of the day. At this point I had a very clear idea of what I wanted to do today. These plans changed: I couldn’t resist the opportunity to ride on a rollercoaster!!!!

The first few stops on the tour are in the city: for those who want to go up the mountain and so on. Then the tour route takes a tunnel through to the other side of Hong Kong Island. The next stop is at a theme park. I had already ruled this out because theme parks usually take at least half a day to visit, taking up far too much time of my limited stay in Hong Kong. At the stop I change my mind and get off the bus at the last minute

Although Hong Kong has Disneyland, Ocean Park is still advertised as HK’s most popular theme park. It’s very much a family themed park. What attracted me the most (other than the rollercoaster), is that the theme park is split in two: a mini zoo and aquarium and small children themed section at the bottom of the mountain and the exciting part on top of the mountain. You get to the top either by taking a 10 minute cable car ride or tram through a tunnel in the mountain. I took the tram and went straight for the fastest rollercoaster. It was a good ride, but not the best coaster I’ve been on. I had given myself a time limit maximum of two hours, so I picked out what looked like the other thrill seeker rides and went straight there. The park is quite large, on a hill and it was hot. I had to walk quite a bit. I would definitely recommend spending a day here, not two hours. The other rides turned out to be quite disappointing. It’s also a strange experience being the only person on a ride….. For a weekend, the park was not busy. Maybe everyone was at Disneyland? Not a bad park though, and the entry price was reasonable compared to other places

I was delighted to discover than Hong Kong had beaches. Beijing is not near the sea, whereas most towns in New Zealand are, so it was nice to breathe salty air again. I had planned to stop here, but the theme park took a little too much time, and I didn’t have my swimming gear with me. I took pictures from the bus though and can say that the beaches are lovely and look great for swimming, sunbathing and picnicking.

My main destination for the day was the small seaside town of Stanley, famous for its beach but mostly Stanley market. After a lunch of dim sum, I hit the market and let my credit card have a little exercise. The market had the usual range of junk, but one or two unique things. I bought a skirt and t-shirt that had screen printed traditional Chinese prints on them. I haven’t seen them anywhere else, which makes me think they were a good buy. I like to buy artisan products. One of my Chinese students really likes both the skirt and t-shirt, which I think is also a good sign that they are a little bit different and special. I spent so long in the market that I never went to the beach at Stanley.

Suddenly I noticed that it was already mid-afternoon. On this tour there is a free Sampan ride, but the last time slot was fast approaching. I ran for the bus, looking rather regretfully at the lovely beach……..

Aberdeen is on the other side of the island, so I enjoyed a 20 minute bus ride along the coast, with great views of the beaches, before reaching the Sampan stop. Aberdeen is probably the most built up area outside of Hong Kong city. I suspect a lot of people live there but commute into town every day for work. The harbour at Aberdeen is famous for fishing, and of course the traditional Chinese fishing boat, the Sampan. Sampans are very much still in use on the harbour, not just for tourists to ride on! In fact many people live on boats in the harbour because it is much cheaper. The Sampan tour took us around this floating city for a closer look. We also cruised past the ‘Jumbo Floating Restaurant’, an enormous restaurant in the middle of the harbour. It was built as a tourist attraction, but it’s a little bit on the tacky side – big and ugly, I mean! It specialises in seafood of course….

The tour does a complete circuit around Hong Kong Island and re-enters the city from the opposite end. The last stop is again for the Peak Tram for those who missed it at the start of the tour. It finishes back at the pick-up point by the ferry terminal.

All in all, another very satisfying tour, even though I changed my plans at the last minute and chose rollercoasters over spending time on the beach.

I spent more time on the Stanley tour than I intended, and so had only enough time to catch the last Kowloon bus. I have decided not to write much about this tour as it follows the same route as the Night Tour. I got off at the Temple Street night market, hoping to also visit the nearby Jade market. Unfortunately, the Jade market closes at 7pm, so I missed out on some jewellery shopping. To my amusement, the first section of the Night Market that I walked into sold sex toys! I spent a good hour browsing the Night Market, but didn’t buy anything as Stanley Market had been more interesting for me. My late start on this tour also meant missing Ladies Market, but to be honest, I had had enough of shopping. And I was hungry.

As I said in a previous story, the best food in Kowloon is in Mong Kok. Seafood is popular. I hate fish and seafood, so I walked a bit before I found a healthy organic Asian food café and had rice and tofu instead of seafood. I will say that the restaurants on the street in Mong Kok looked extremely popular with both tourists and locals, so I recommend checking them out if you are a fan of fresh seafood.

I finished the evening by walking along Nathan Road back to my hotel. There are quite a few electronic shops along the way and I wandered into a few looking for deals on camera accessories. The prices are not bad, but again I found myself not in the mood for bargaining or buying expensive items, so the credit card stayed in my hand bag!

The next day I had to go back to Beijing, but I was really happy with my two days of intense touring! 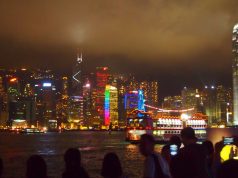 A 48 Hour Hong Kong Experience: Something Special-Kowloon By Night 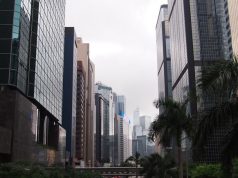 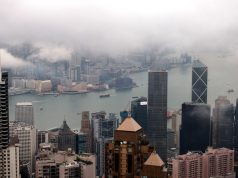 A 48 Hour Hong Kong Experience: Getting Around Town